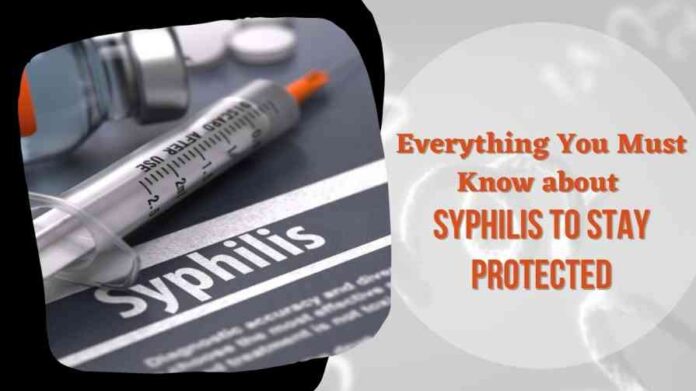 Syphilis is a sexually transmitted infection that occurs due to bacterium Treponema pallidum. It can be recognized by the appearance of an open ulcerative sore called a chancre, on the anus, genitals, rectum or mouth. Antibiotics can help in the treatment of syphilis, however, the course depends on the stage of the infection such as – primary, secondary, latent, and tertiary. Each stage has its own characteristic signs and symptoms as well as probable complications with them. Though the thought of getting syphilis seems to be distressing, the infection can usually be treated if detected, recognized and thus, avoided by using condoms and reducing your sex partners. Therefore, visit your nearest STI clinic and get yourself tested and treated on time.

This is usually visible through a chancre within 21 days of exposure. Since chancres are internal and have minimal pain, they can be missed by both the patients and the doctors. Without undergoing proper treatment, a chancre will heal within three to six weeks.

This generally takes place within four to 10 weeks of a primary infection. One of the symptoms is a widespread rash on the limbs, trunk, palms and soles of the feet. There might be flu-like symptoms that can accompany the rash. You will also find cases that can manifest themselves in abnormal ways. Symptoms begin to resolve without any treatment in three to six weeks.

This can be marked due to the absence of symptoms that may last from years to decades and is completely based on the blood tests. In the case of diagnostic purposes, the stage can be illustrated further as being either early latent or late latent.

This is considered to be the serious stage of infection. It can be characterised by major diseases of the bones, liver, skin, heart and other organs. Neurosyphilis, is the most severe complication that generally affects the brain and extremely difficult to be treated.

Congenital syphilis is considered to be a serious medical condition when an infected mother passes syphilis to her would-be-born baby. Besides, liver, lung, spleen, and brain disorders, congenital syphilis may be the reason for physical and facial malformations, intellectual disability and developmental delays.

How syphilis can be diagnosed

With the help of blood tests, syphilis can be detected within a week or two of exposure. The results can be obtained in the first three months, while the rate of false positives begins to increase after 90 days. Blood, body fluids and tissue can be tested directly through a process called dark-field microscopy that provide doctors with visual evidence of an infection. It may be used during an early infection or in the later-stage disease when infections are quite hard to diagnose.

How syphilis is treated

Syphilis infections can be treated by taking antibiotics, as suggested by your doctor. Penicillin is believed to be the drug of choice while others such as azithromycin, ceftriaxone, doxycycline or tetracycline might be used in case a person seems to be allergic to penicillin. The STI syphilis treatment may differ due to some kind of infection:

Neurosyphilis needs a complete 10 to 14 days treatment course that can either be through intramuscular penicillin or a combination of oral medications and penicillin shots.

How you can prevent the spread of syphilis

Condoms are considered to be the first-line of defense against different sexually transmitted diseases like syphilis. Still, many people love to have sexual intercourse with their partner without using any kind of protection. Though condoms are not the perfect option, they are still the most reliable form of prevention short of abstinence. Also, you need to lessen the number of people you enjoy sex with, particularly the ones who seem to be anonymous. This means the more people you have sex with, the greater your chances of infection will be. So, if you want to protect yourself and others, then it is advised to get an STD test done from your private doctor in the city of London.

Though some people are at greater risks of syphilis when compared to others, do not think that you are safe just because you don’t “sleep around.” If you have any doubt about your present health condition, then get yourself tested immediately. This will help you to know if you are having this kind of infection and may pass it on to others. Even if you seem to test positive, the earlier you know about it, the quicker you can be treated and the less likely you will have the chances to infect other people around you.

How Yoga Helps with Erectile Dysfunction

How To Support A Victim Of Surgical Errors And Medical Negligence